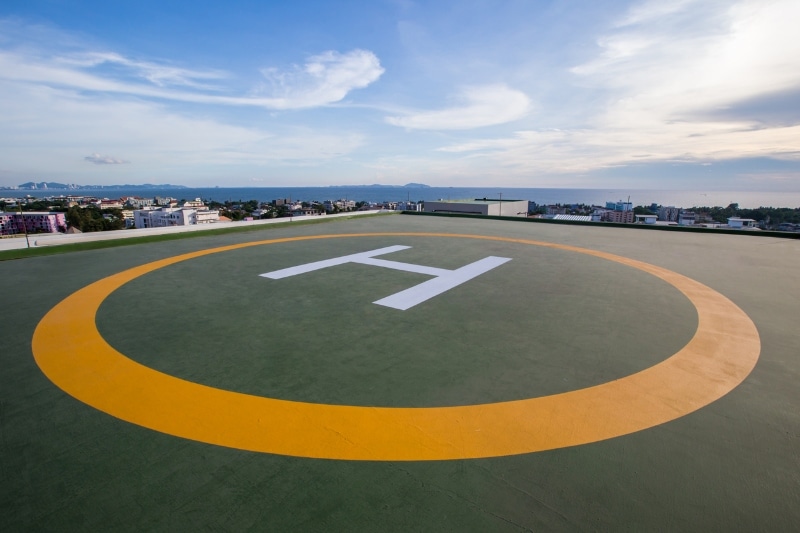 The world’s first full-scale air taxi “vertiport” was unveiled on 21 October 2019 during the Intelligent Transport Systems (ITS) World Congress in Singapore, through a collaboration between Volocopter, the German urban air mobility and air taxi company, and Skyports, the vertiport developer, owner and operator. Volocopter and Skyports are working together for the introduction of commercial air taxi services in Singapore and beyond.

The vertiport, built on the Float @ Marina Bay is the physical infrastructure required for eVTOL (electric vertical take-off and landing) passenger air taxis to take off and land. Its modular design can be easily adapted to fit rooftops, railway stations, parking lots and other metropolitan locations.

On 22 October, Volocopter successfully completed its first manned flight over Singapore’s Marina Bay. This was the last trial of a test series to verify and validate the ability of Volocopter air taxis to fly over the area. Government authorities including the Ministry of Transport (MOT), the Civil Aviation Authority of Singapore (CAAS), and the Economic Development Board (EDB) supported Volocopter in this testing phase.

A 2X model of the company’s test series flown by a pilot onboard was used. The aircraft can be flown by a pilot with a joystick, or remotely from the ground. The flight covered a distance of approximately 1.5 km and lasted for two minutes at an average cruising height of 40 m. Leading up to the flight, the aircraft had undergone intensive testing in Germany for several months. Subsequently, a rigorous flight test program to verify the Volocopter 2X aircraft performance under local environment was conducted at Seletar Airport in accordance with CAAS.

Volocopter is developing the first fully electric eVTOL aircraft in certification to safely and quietly transport passengers within cities. In 2011, Volocopter performed the first-ever manned flight of a purely electric multicopter and since then it has showcased numerous public flights with its full-scale aircraft, including a flight at the CES 2018 in Las Vegas and the world’s first autonomous eVTOL flight in Dubai 2017. Meanwhile, Skyports is working with passenger and cargo vehicle manufacturers around the world to secure, design, build, own and operate vertiports. In support of their expansion plans in Singapore Volocopter opened an office in Singapore in January 2019 and has started to build up a local team. Skyports followed suit in September 2019 and will be hiring full-time local staff in early 2020.